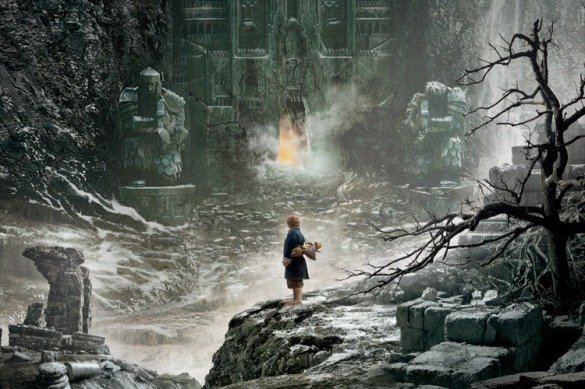 The Desolation of Smaug is certainly a lighter film to its predecessor. The long-winded songs have been dispensed with, the action moves at a much quicker pace, and our heroes have found other ways to travel than walking!

While An Unexpected Journey assumed a dark and malevolent tone reminiscent of The Lord Of The Rings trilogy, the second film matches the light-hearted tone of the books, becoming a wonderful, action-packed, fantasy-adventure romp. The barrel sequence in particular stands out as a good laugh, where our heroes escape the Wood-Elve’s Kingdom through the rapids in barrels, comically taking out an army of Orcs (that appear to be as good of a shot as stormtroopers!).

The actors are, once again, spot-on. Who could fail to smile at Martin Freeman’s charm as Bilbo Baggins? Richard Armitage adds a touch of suspense as the conflicted Thorin Oakenshield and Stephen Fry adds some wonderful comedic villainy as the Mayor of Dale. But the real star was newcomer Benedict Cumberbatch, the voice of Smaug. Fans were worried if any actor would be able to pull off the dragon’s honey-toned voice, but Cumberbatch nailed it and kept audience’s attention firmly focused on the screen.

A noted difference from Lord Of The Rings is that Peter Jackson has attempted to give more characters a background and context in the movie. The dwarf troupe each have their own distinct personalities, rather than just ‘being there’. Thorin is a stand-out character in this sequel, whose love of the arkenstone almost mirrors Bilbo’s love of the ring. But the characterization can be a bit rushed, such as with Beorn, and more time should have been spent introducing a new important character, Tauriel, who unfortunately only seems to exist in this film for the purpose of a cliché and predictable love triangle.

The problem with this film is that it introduces many plot points but doesn’t resolve many. It introduces characters that are assumed to have an important role in the final film, then they disappear very quickly. Unfortunately, like most middle films in a trilogy, it feels like a great deal of filler and set-up for the final instalment. The film attempts to make links to Lord Of The Rings as well, bringing back a familiar character, but has a little too much name-dropping to not feel forced.

The CGI is excellent, as expected for this series. The dragon looks fantastic, but what is really impressive is the attention to detail in the landscapes. The CGI additions to the scenery are blended so seamlessly with the real locations that you can forget it’s just a fantasy. Peter Jackson’s Middle Earth is incredible to look at and it’s so refreshing to see a film where CGI has been used wisely and the creators haven’t gone overboard. And a last note, the costumes in these films are stunning and awesome to look at, another of the film’s achievements, which, all combined, bring together a spectacular visual treat on-screen.